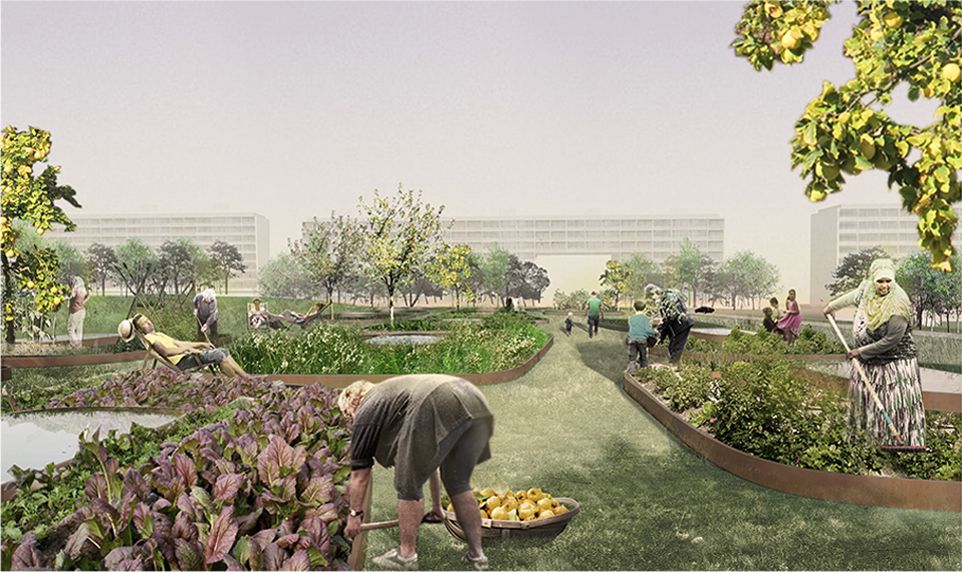 Gellerup is a predominantly residential area in the western part of the city of Aarhus. As often happens in neighborhoods where the dominant character is a residential one, in Gellerup there are several social problems due to the lack of employment, the difficulties of cultural integration between different ethnic groups, the visible separation between this district and the more active parts of the city. In order to avoid the risk of ghettoization, the City of Aarhus and the housing association Brabrand Boligforening are jointly rolling out an innovative master plan for Gellerup and Toveshøj, combining major physical changes with jobs, businesses, culture, social efforts and initiatives to ensure a safer district.

The specific scope of the competition was to design a landscape intervention for the Gellerup park, situated in the center of the residential area, and to define strategic activities triggering social activation.

Our proposition is focused on enabling the creation of (self)employment for Gellerup’s residents and on the definition of a stronger identity for the neighborhood, thus increasing the attractiveness of the area. The physical configuration of the park is characterized by a central axis that is used to structure the physical landscape features and is the core of the activity plan. Our design focuses the seasonal activation of the area along this axis, where infrastructure for both open air and indoor activities will be built.

The various activities going on within the park, organized according to thematic areas such as urban farming, sports & play, stage and viewpoints, are published on an interactive hyperlocal agenda: a digital calendar showing events, announcements and activities taking place in different parts of the park, which is always physically visible as well as being accessible from mobile devices. The citizens are invited to take part in the activities and to take on roles as experts, professionals, trainees, volunteers, amateurs and visitors in the life of the park, and are encouraged to share their competence with other members of the community.

An important role in the project is given to the time strategy which consists of avoiding “black block” development by keeping citizens involved and aware of the timeline and requirements of the process, and in a more progressive approach that allows us to distribute the estimated budget, relocate it and adapt it to the needs, not only of the park, but also of the neighborhood.

This project has been jointly developed and presented with the Danish landscape office Kristin Jensen.